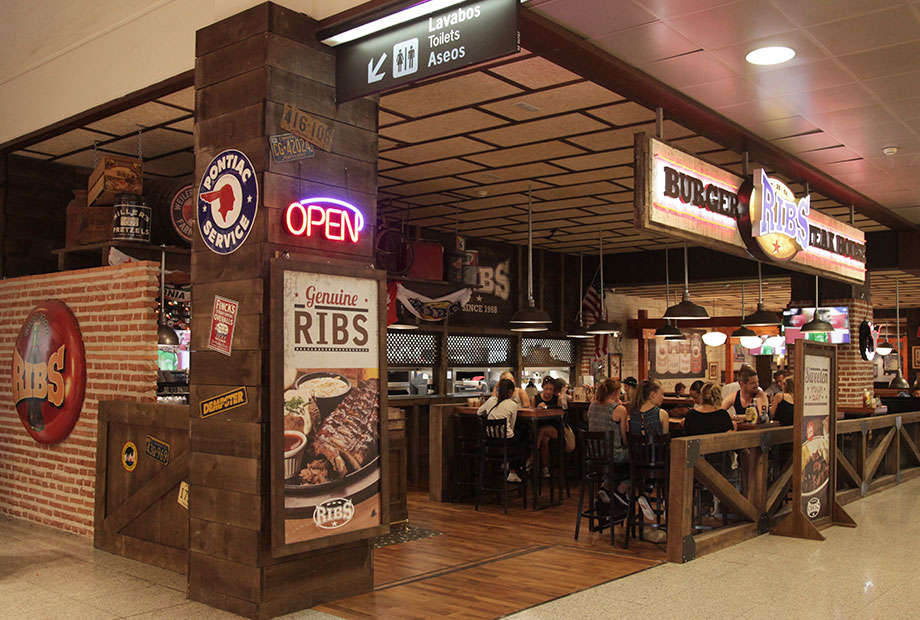 It has launched new businesses for the travel sector, as well as opening establishments for its own and third-party brands.

Eat Out strengthens its commitment to the travel sector. Among the latest innovations are the actions taken at Barcelona-El Prat Airport, where, in addition to renewing the range with brands from its portfolio, some of them also have a new image, including franchise agreements with companies from other groups. Specifically, the gastronomic range of T2 has recently been extended with ‘B by fresh & ready’, an evolution of its brand ‘Fresh & Ready’, which is focused on fresh, natural products such as sandwiches, fruit, milkshakes and juices. The terminal has also just opened a Ribs restaurant as part of its chain, which is themed around the cuisine and lifestyle of the United States, offering products cooked on a charcoal grill. This restaurant will be the second that the brand locates in an airport, after the opening last December of a ‘Ribs’ restaurant in Fuerteventura Airport.

These two establishments complement the commercial range of terminal 2 of Barcelona Airport, which now has 13 catering spaces and 26 shops. Eat Out operates other establishments there as part of its companies ‘Caffè di Fiore’ (3), ‘Jamaica’, ‘Dehesa Santamaría’ and ‘Pans & Company’. Along with these, Áreas, which is a specialist in travel services, operates several points of sale under the brands ‘Deli & Cia’ (own) and ‘Burger King’, which in the coming two months will be joined by ‘Dots’ (own, with presence in Portugal) and ‘Santa Gloria’.

For its part, terminal 1 of the airport is also improving part of its thirty-odd establishments. In this case, Eat Out has just announced the signing of an agreement with the Malaga group O Mamma Mia for the opening of a restaurant under the fresh concept of ‘Mamma Mia Sapore Italiano’, which launched the chain of Italian restaurants in 2014. This is a pizza by the slice concept, featuring recipes that range from the most classic pizzas to the most creative, as well as fresh pasta cooked in front of customers, paninis and fresh mozzarella.

Eat Out and its travel channel division

Concerning the opening of the bar ‘Gambrinus’, this will be the result of an agreement between Eat Out and the Beer&Food group. This space, which will soon be joined by another in Malaga Airport, will mean the debut of the ‘Gambrinus Gastro-Cervercería’ gastropub concept at these locations. In this regard, Gambrinus Gastro-Cervecería has been conceived in order to adapt to the demands and changes in the market, and elevates its gastronomic level with the aid of chef Jesús Almagro, who has worked closely with the company on the menu design. The new establishments will offer an image that has been designed by the interior architect Miguel García Caridad, who has combined rustic materials with a more industrial inspiration, along with current design trends, such as the use of cement tiles. Since its creation in 2015, Gambrinus Gastro-Cervecería has been in a process of expansion, which will be boosted in the short term with the opening of two new establishments in Madrid and one in Algeciras.

Eat Out has thereby confirmed its commitment to the travel channel segment, in which the group operates over 60 points of sale, including a dozen under third-party brands. It therefore has a presence in six airports in Spain and three high-speed railway stations.

EatOut Travel is the travel restaurant division owned by Ibersol Group. It is one of the largest food restaurant groups on the Iberian Peninsula, with over 640 restaurants, managing its own brands, like Pans&Company, Ribs, Santamaría and FrescCo, and international licences like Burger King, Pizza Hut and KFC.

EatOutTravel is currently present in Spain’s leading airports and rail stations, and provides its services in other locations too, such as large fashion outlets and football stadiums.

To serve its customers, EatOut Travel has a complete portfolio of over 25 leading national and international restaurant brands that span the entire range of food services and adapt perfectly to the demands and trends of any type of customer or location.

Eat Out is part of Ibersol (Euronext Lisbon IBERSOL, SGPS), one of the main restaurant operators on the Iberian Peninsula, with sales of 450 million euros and an EBITDA of 61 million euros in 2018. It manages its own brands, like Pans & Company, Ribs, Santamaría and FrescCo, and licences like Burger King, Pizza Hut and KFC.

This website uses its own and third-party cookies to collect statistical information about your browsing, analyze your habits and compile statistics about your interaction with our website. You can obtain more information in our Cookies Policy. If you click "Accept all", you will accept all cookies. You can also set your preferences or reject the use of cookies. The non-acceptance or deactivation of cookies does not prevent the display of the website, although it could affect the speed of navigation or its correct functioning.
ConfigureAccept all

This website uses its own and third-party cookies to collect statistical information about your browsing, analyze your habits and compile statistics about your interaction with our website. You can obtain more information in our Cookies Policy. If you click "Accept all", you will accept all cookies. You can also set your preferences or reject the use of cookies. The non-acceptance or deactivation of cookies does not prevent the display of the website, although it could affect the speed of navigation or its correct functioning.
Not necessary
Any cookie that is not particularly necessary for the operation of the website and that is used specifically to collect personal data from the user through analysis, advertisements, other embedded content are called non-necessary cookies. It is mandatory to obtain the consent of the user before executing these cookies on your website.
Functional
Functional cookies help to perform certain functionalities like sharing the content of the website on social media platforms, collect feedbacks, and other third-party features.
Performance
Performance cookies are used to understand and analyze the key performance indexes of the website which helps in delivering a better user experience for the visitors.
Analytics
Analytical cookies are used to understand how visitors interact with the website. These cookies help provide information on metrics the number of visitors, bounce rate, traffic source, etc.
Advertisement
Advertisement cookies are used to provide visitors with relevant ads and marketing campaigns. These cookies track visitors across websites and collect information to provide customized ads.
Others
Other uncategorized cookies are those that are being analyzed and have not been classified into a category as yet.
Necessary
Necessary cookies are absolutely essential for the website to function properly. These cookies ensure basic functionalities and security features of the website, anonymously.
SAVE & ACCEPT